A) A map may have a structure similar or dissimilar to the structure of the territory,

B) A map is not the territory.

Bateson, in “Form, Substance and Difference” has a different take on this: he starts by explaining the pattern-substance dichotomy

Let us go back to the original statement for which Korzybski is most famous—the statement that the map is not the territory. This statement came out of a very wide range of philosophic thinking, going back to Greece, and wriggling through the history of European thought over the last 2000 years. In this history, there has been a sort of rough dichotomy and often deep controversy. There has been violent enmity and bloodshed. It all starts, I suppose, with the Pythagoreans versus their predecessors, and the argument took the shape of “Do you ask what it’s made of—earth, fire, water, etc.?” Or do you ask, “What is its pattern?” Pythagoras stood for inquiry into pattern rather than inquiry into substance.1 That controversy has gone through the ages, and the Pythagorean half of it has, until recently, been on the whole the submerged half.

Then he states his point of view:

Always the process of representation will filter it out so that the mental world is only maps of maps of maps, ad infinitum.

At this point Bateson puts a very interesting footnote:

Inspired by Bateson, I want to explore from the mathematical side the point of view that there is no difference between the map and the territory, but instead the transformation of one into another can be understood by using tangle diagrams.

Let us imagine that the exploration of the territory provides us with an atlas, a collection of maps, mathematically understood as a family of two operations (an “emergent algebra”). We want to organize this spatial information in a graphical form which complies with Bateson’s footnote: map and territory have only local meaning in the graphical representation, being only the left-hand-side (and r-h-s respectively) of the “making map” relation.

Look at the following figure:

In the figure from the left, the “v” which decorates an arc, represents a point in the “territory”, that is the l-h-s of the relation, the “u” represents a “pixel in the map”, that is the r-h-s of a relation. The relation itself is represented by a crossing decorated by an epsilon, the “scale” of the map.

The opposite crossing, see figure from the right, is the inverse relation.

Imagine now a complex diagram, with lots of crossings, decorated by various
scale parameters, and segments decorated with points from a space X which
is seen both as territory (to explore) and map (of it).

In such a diagram the convention map-territory can be only local, around each crossing.

There is though a diagram which could unambiguously serve as a symbol for
“the place (near) the point x, at scale epsilon” : 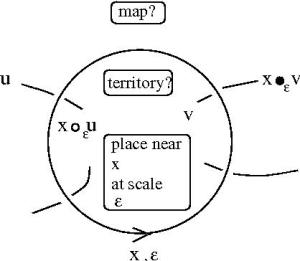 In this diagram, all crossings which are not decorated have “epsilon” as a decoration, but this decoration can be unambiguously placed near the decoration “x” of the closed arc. Such a diagram will bear the name “infinitesimal place (or chora) x at scale epsilon”.

A difference, then, is an abstract matter.

Difference travels from the wood and paper into my retina. It then gets picked up and worked on by this fancy piece of computing machinery in my head.

(from “Form, Substance and Difference”, Nineteenth Annual Korzybski Memorial
Lecture delivered by Bateson on January 9, 1970, under the auspices of the Institute of General Semantics, re-printed from the General Semantics Bulletin, no.
37, 1970, in Steps to an Ecology of Mind (1972))

This “difference which makes a difference” statement is quite famous, although sometimes considered only a figure of speach.

I think it is not, let me show you why!

For me a difference can be interpreted as an operator which relates images of the same thing (from the territory) viewed in two different maps, like in the following picture: 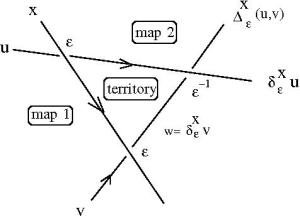 This figure is taken from “Computing with space…” , see section 1 “The map is the territory” for drawing conventions.

Forget now about maps and territories and concentrate on this diagram viewed as a decorated tangle. The rules of decorations are the following: arcs are decorated with “x,y,…”, points from a space, and the crossings are decorated with epsilons, elements of a commutative group (secretly we use an emergent algebra, or an uniform idempotent right quasigroup, to decorate arcs AND crossings of a tangle diagram).

What we see is a tangle which appears in the Reidemeister move 3 from knot theory. When epsilons are fixed, this diagram defines a function called (approximate) difference.

1. We could add to this diagram an elementary unknot passing under all arcs, thus obtaining the diagram 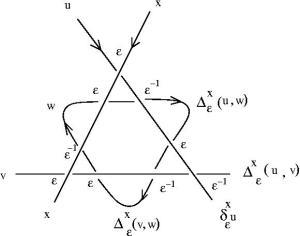 2. Let us add an elementary unknot over the arcs of the tangle diagram, like in the following figure 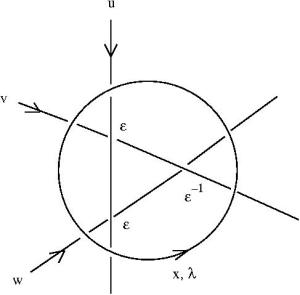 called “difference inside a chora” (you have to read the paper to see why). According to the rules of tangle diagrams, adding unknots does not change the tangle topologically (although this is not quite true in the realm of emergent algebras, where the Reidemeister move 3 is an acceptable move only in the limit, when passing with the crossing decorations to “zero”).

By using only Reidemeister moves 1 and 2, we can turn this diagram into the celtic looking figure 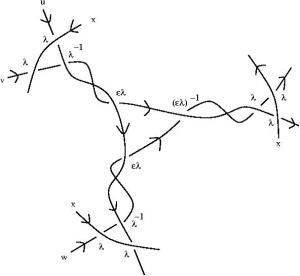 which shows again four differences: the initial one in the center and three others around.

This time we got a statement saying that a difference is preserved under “infinitesimal parallel transport”.

So, indeed, a difference makes four differences, in at least two ways, for a mathematician.

If you want to understand more from this crazy post, read the paper 🙂