Conventional diagrams of the Internet include servers and routers and so on, but they leave out the most numerous and important routers of all: people.
The problem is, people have limited time, attention and accuracy—all of which means they are not very good at capturing data about things in the real world.

We’re physical, and so is our environment. Our economy, society and survival aren’t based on things or information—they’re based on objects. You can’t eat bits, burn them to stay warm or put them in your gas tank. Things and information are important, but objects matter much more. Yet today’s information technology is so dependent on data originated by people that our computers know more about things  than objects.

Here is a depiction of a thing [source]: 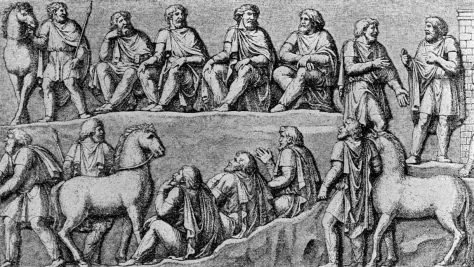 A thing  was the governing assembly  made up of the free people of the community, meeting in a place called a thingstead.

Near to us are what we usually call things. The jug is a thing. What is a jug? We say: a vessel.  As a jug, the vessel is something self-sustained,  self-supporting, or independent.

An independent, self-supporting thing may become an object if we place it before us.

An object is a reification of a thing.
[Kenneth Olwig: “Heidegger, Latour and The Reification of Things:The Inversion and Spatial Enclosure of the Substantive Landscape of Things – the Lake District Case”, Geografiska Annaler: Series B 2013 Swedish Society for Anthropology and Geography]
An object is therefore real,  but all about thing and thingstead is lost.

______________________________
3.  An example of a thing and some of it’s reifications:
The short history of the rhino thing
Quotes  and images from here:
On 20 May 1515, an Indian rhinoceros arrived in Lisbon from the Far East.
After a relatively fast voyage of 120 days, the rhinoceros was finally unloaded in Portugal, near the site where the Manueline Belém Tower was under construction. The tower was later decorated with gargoyles shaped as rhinoceros heads under its corbels.[11]
A rhinoceros had not been seen in Europe since Roman times: it had become something of a mythical beast, occasionally conflated in bestiaries with the “monoceros” (unicorn), so the arrival of a living example created a sensation.
The animal was examined by scholars and the curious, and letters describing the fantastic creature were sent to correspondents throughout Europe. The earliest known image of the animal illustrates a poemetto by Florentine Giovanni Giacomo Penni, published in Rome on 13 July 1515, fewer than eight weeks after its arrival in Lisbon. 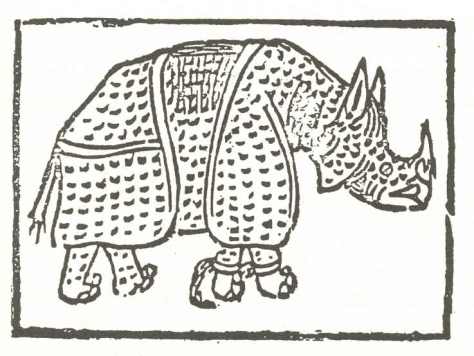 Valentim Fernandes, , saw the rhinoceros in Lisbon shortly after it arrived and wrote a letter describing it to a friend in Nuremberg in June 1515.  A second letter of unknown authorship was sent from Lisbon to Nuremberg at around the same time, enclosing a sketch by an unknown artist. Dürer saw the second letter and sketch in Nuremberg. Without ever seeing the rhinoceros himself, Dürer made two pen and ink drawings,[23] and then a woodcut was carved from the second drawing, the process making the print a reversed reflection of the drawing.[19][24]

The German inscription on the woodcut, drawing largely from Pliny’s account,[13] reads:

Comment: you can see here a thing taking shape. 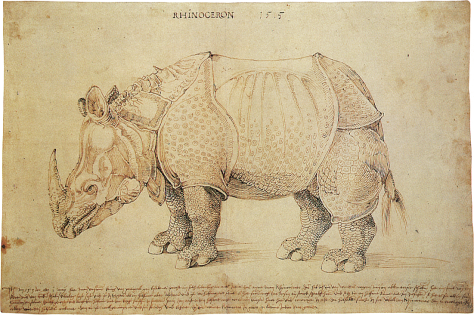 Despite its errors, the image remained very popular,[5] and was taken to be an accurate representation of a rhinoceros until the late 18th century.
The pre-eminent position of Dürer’s image and its derivatives declined from the mid-to-late-18th century, when more live rhinoceroses were transported to Europe, shown to the curious public, and depicted in more accurate representations.
Until the late 1930s, Dürer’s image appeared in school textbooks in Germany as a faithful image of the rhinoceros;[6] in German the Indian rhinoceros is still called the Panzernashorn, or “armoured rhinoceros”. It remains a powerful artistic influence, and was the inspiration for Salvador Dalí‘s 1956 sculpture, Rinoceronte vestido con puntillas (Rhinoceros dressed in lace), which has been displayed at Puerto Banús, in Marbella, since 2004. 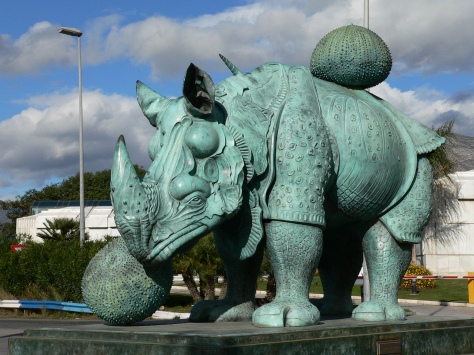 Who is to be concerned? What is to be considered? How to represent the sites where people meet to discuss their matters of concern?

How does the Internet of Objects respond to these questions about things and thingsteads?

My guess and proposal is to try to put space (i.e. thingstead) into the IoT.  By design.
______________________________
5.   Not the RFID space.  Not the GPS space.  This may be useful for the goal of inhuman optimization, but will not promote by itself the conversation needed to have around things and their reifications, the objects.
People are going to divert the ways of the IoT, designed with  this lack of appetite for human communication, as they succeeded previously!
For understanding why RFID and GPS  are not sufficient, let’s imagine, like Borges, that the world is a library.
Is this enough for me, reader, who wants to retrieve (and discuss with other readers about) a book without knowing it’s title, nor it’s position on a shelf?
No!  I have to call a librarian (the bottleneck), an inhuman and very efficient one, true,  who will give me a list of possible titles and who will fetch the book from the right shelf. I don’t have direct access to the library, nor my friends which may have different ideas about the possible titles and shelves where the book might be.
The librarian will optimize the book-searching and book-fetching, will optimize all this not for me, or for you, or for our friends, but for a bayesian individual in a bayesian society. (see Bayesian society)
What I would like is to have access to my library (in the big Universal Library) and to be able to share my spatial competences of using my library with my friends. That means a solution for the following problem, which  Mark Changizi  mentions in relation to e-books (but I think is relevant instead for the human IoT)

My personal library serves as extension of my brain. I may have read all my books, but I don’t remember most of the information. What I remember is where in my library my knowledge sits, and I can look it up when I need it. But I can only look it up because my books are geographically arranged in a fixed spatial organization, with visual landmarks. I need to take the integral of an arctangent? Then I need my Table of Integrals book, and that’s in the left bookshelf, upper middle, adjacent to the large, colorful Intro Calculus book.

______________________________
6.  What else?  These notes are already rich enough, therefore please be free to stop reading, if you feel like.
Actually, this is a technical problem: how to create space where there is none, without using arbitrary names (RFID) or global (but arbitrary) coordinates (GPS)?
It is the same problem which we encounter in neuroscience: how the brain makes sense of space without using any external geometrical expertise? how to explain the “brain as a geometry engine” (as Koenderink) when there is no rigorous  model of computation for this brain behaviour?

There may be a point in holding that many of the better-known brain processes are most easily understood in terms of differential geometrical calculations running on massively parallel processor arrays whose nodes can be understood quite directly in terms of multilinear operators (vectors, tensors, etc).
In this view brain processes in fact are space.

I have two proposals for this, which go far beyond explanations which may fit into a post.  I put them  here only for the sake of giving an explanation of the motivations I have, and maybe for inviting the interested people to gather for discussing about these things.
It is about “computing with space”, which is the middle name of this blog.  The first name, chorasimilarity, is made by gluing Plato’s notion of space “chora” with  (self-)”similarity”, which is, I believe the essence of transforming space from a “vessel” into a self-sustaining, self-supporting thingstead.
The first proposal is to concentrate on completely asynchronous, purely local  models of distributing computing as a low-level basis for the architecture of a true IoT.
For example: mesh networks. (Thank you Peter Waaben.)
UPDATE: May be relevant:  Launching the Wolfram Connected Devices Project.
I know of only one model of computation which satisfy the previously mentioned demands and also  solves the problem of putting space into the Net:
GLC actors, artificial chemical connectomes, topological issues and knots
It is based on actors which gather in an agora to discuss things that matter.  Literally!
But there is long way to  arrive to a proof of principle, at least, for such a space-rich IoT, which brings me to the second proposal, which (may) be too technical for this post, alluded here: A me for space.
______________________________